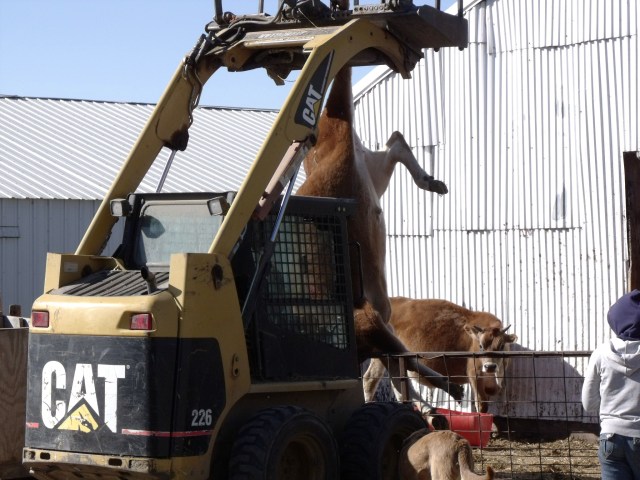 We’ve been out of beef for a while and were waiting for some cooler weather to process our beef in.  There were a few days that worked last week so we slammed one through rather quickly.

If you have not eaten Jersey meat before, you are missing some very tasty beef.  It is our beef of choice here and we raise plenty of them not only for ourselves but for sale to those who prefer to know where their beef comes from. 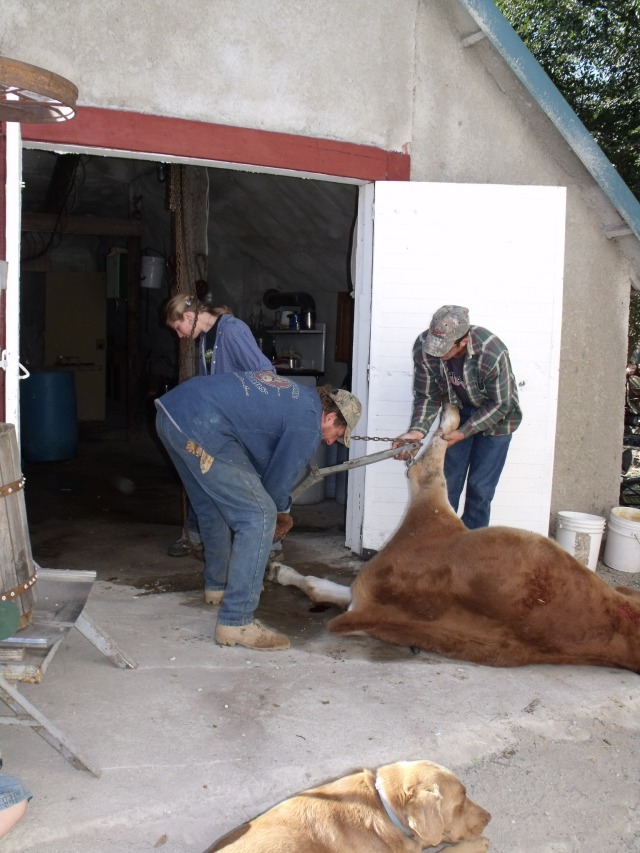 I have some photos to post but was in and out busy with other kitchen duties which included making a meal for my hungry crew of helpers.  At one point I left a camera with the kids hoping they would catch some good shots. 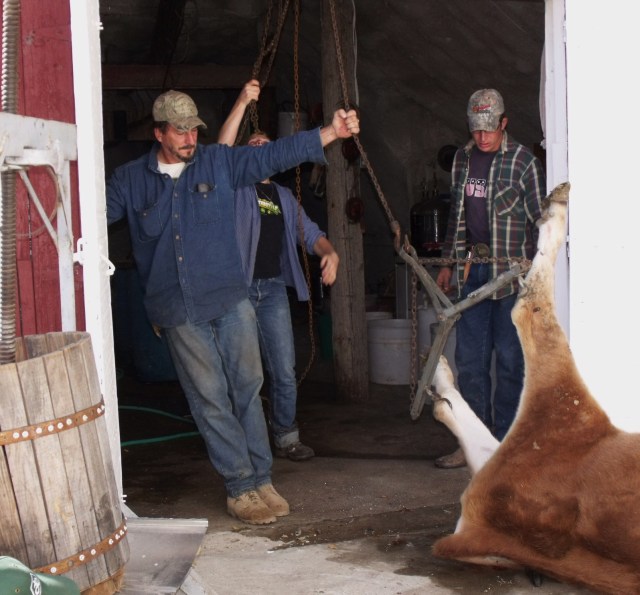 We were set up pretty well out in the butcher shop.  Very hot water is a necessity, along with plenty of sharp knives, a good knife sharpener, a variety of food lugs, a good hand saw, electric saws all, hooks for hanging etc. are pretty much the basic stuff a person needs.  The hot water, by the way is not to be used on the beef, only for cleaning purpose.

Several years ago we invested in a wrapping paper and tape dispenser which makes the job of wrapping and marking easy.  The best paper to obtain is the one that is specifically for the freezer and is coated with shiny “wax” on the inside.  I also purchase the little waxy sheets of plastic to use in between the layers of meat or pre-formed hamburger patties.  This is important to those of us who don’t use micro waves and may not have planned the meals in advance and need to break the meat apart fast and easy.  I purchased a little hand run hamburger or pork patty maker at our local Runnings store.   Too bad that I missed the patty making session outside for any photos but some of us were in the house at that time making Philly style cheese steak sandwiches on fresh-baked ciabatta loaves and home-made potato chips and photos were not a priority:)  The kids have the patty making down to a science and love to run that little unit.

As soon as we wrap and label the meat, Mario gets to carry the neat little packages to the freezer.  He thinks this is an important job and we don’t let him think otherwise! 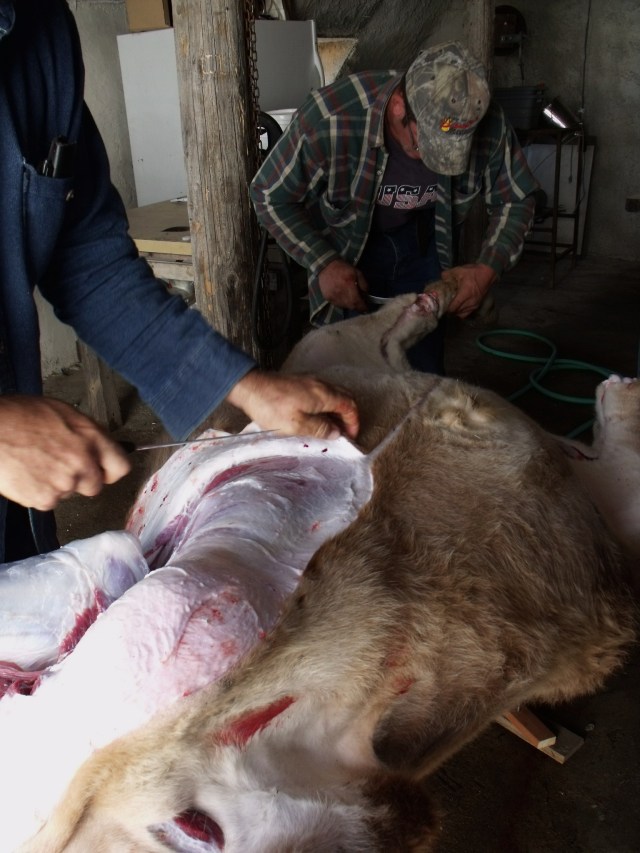 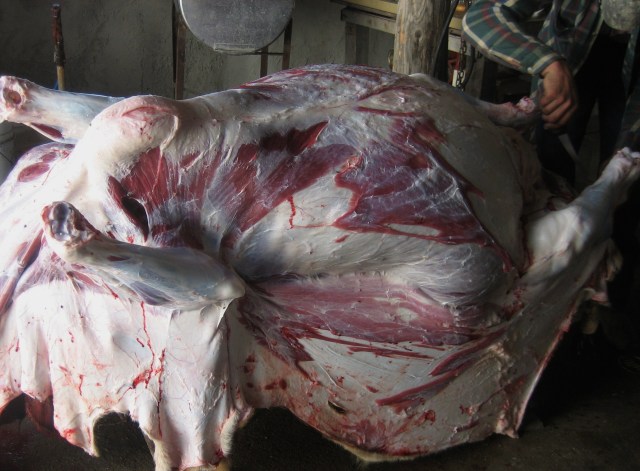 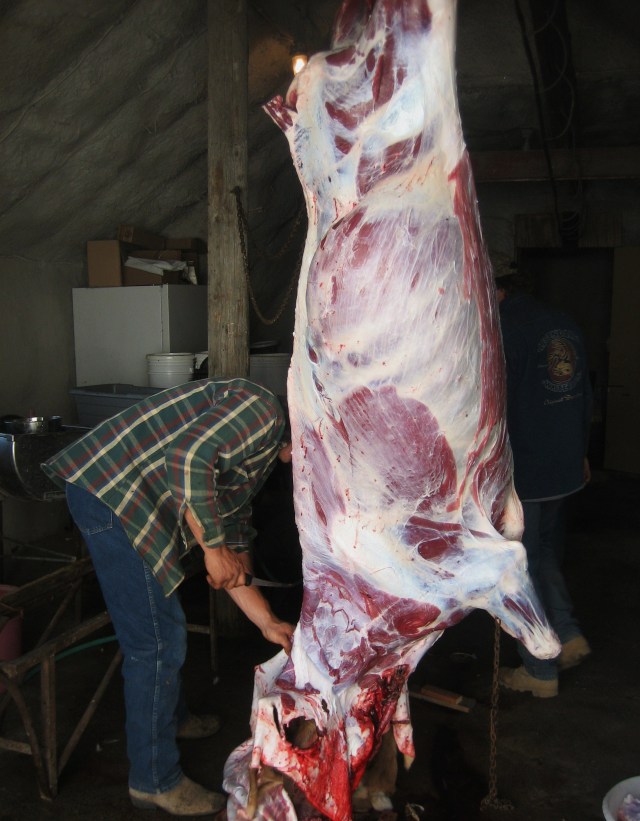 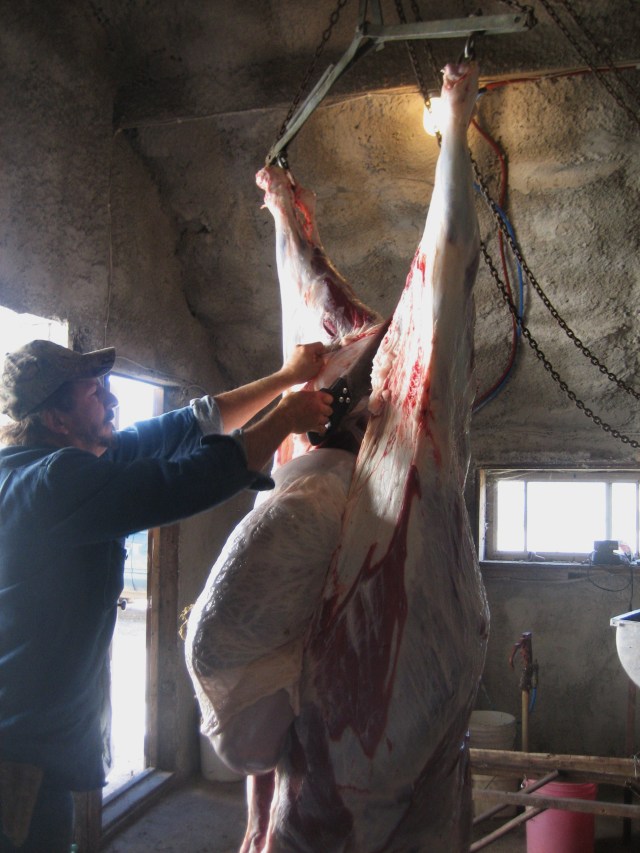 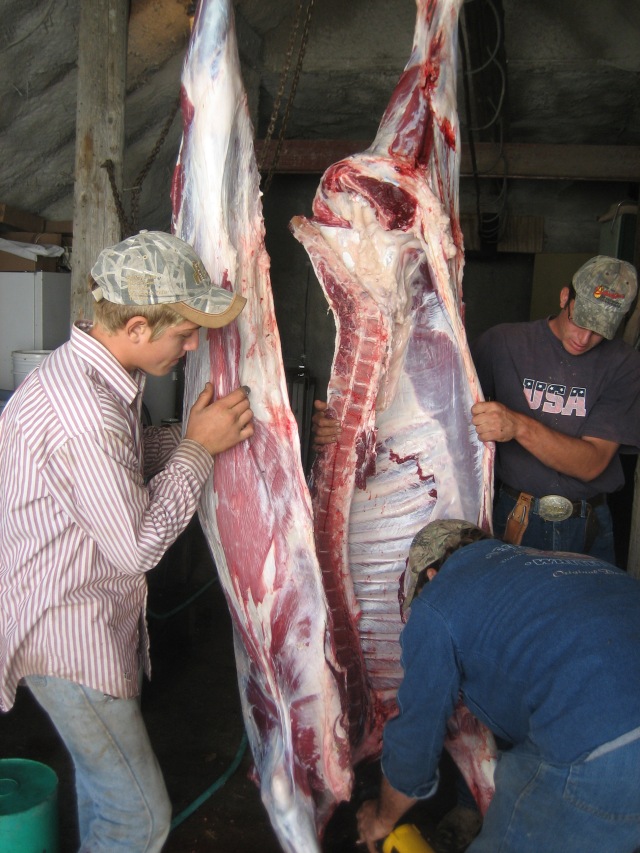 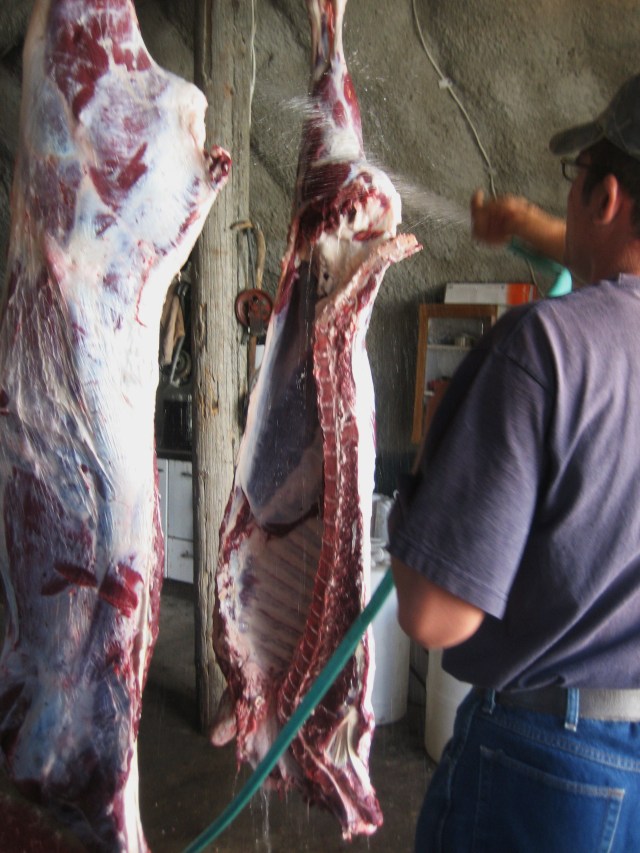 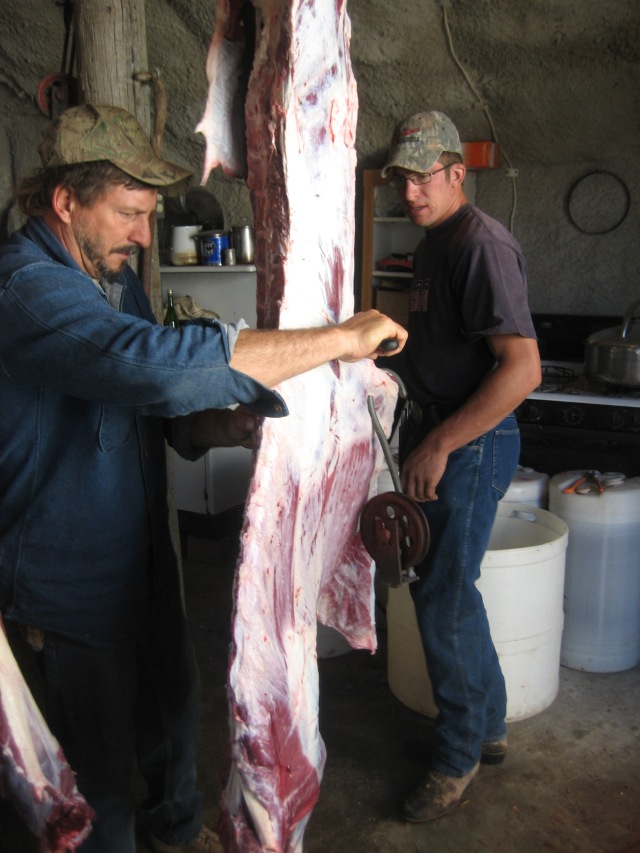 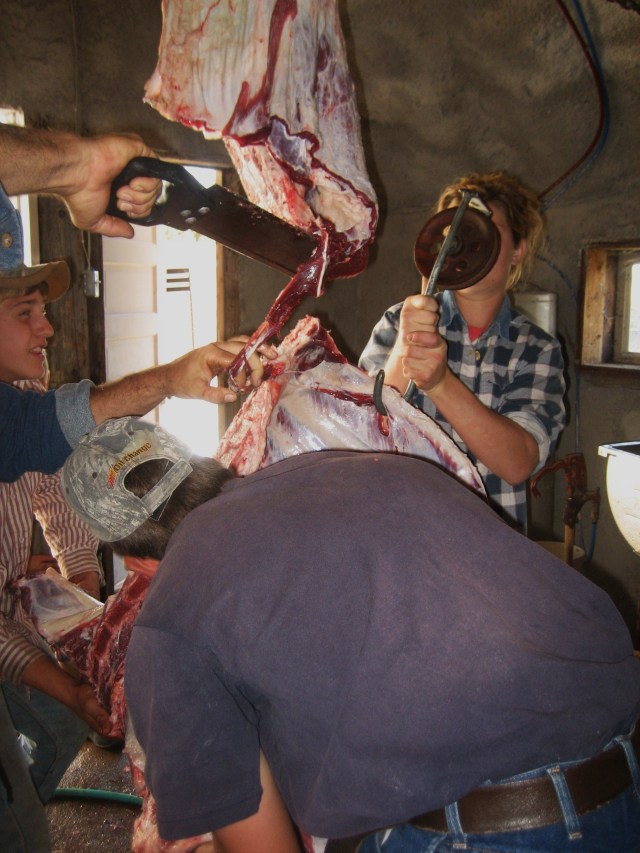 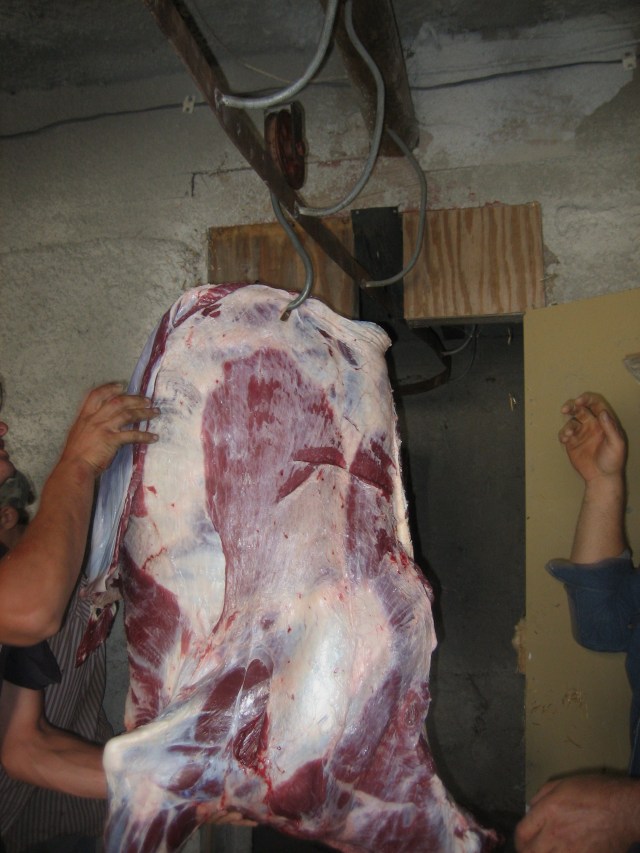 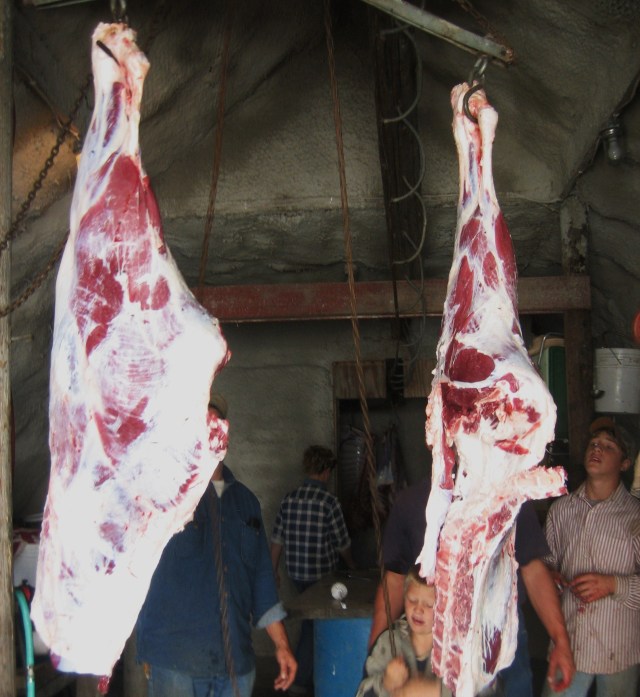 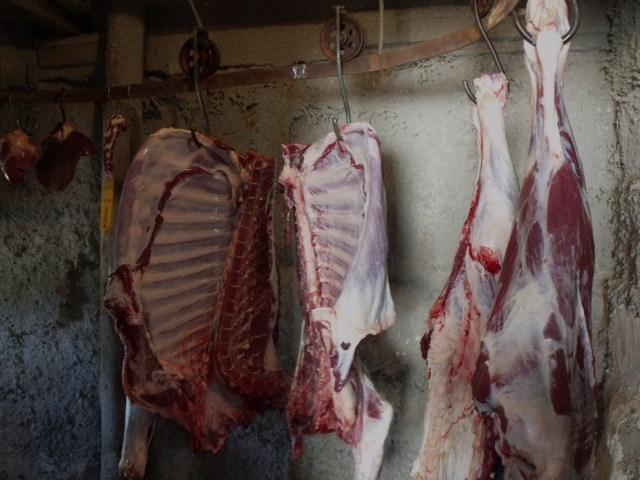 That is where the photos ended.  We were so busy when cutting and packaging day arrived that I forgot to take some pictures.  It took approximately 5 hours to cut the steer and wrap it for the freezer with most of us working in between regular milking, kitchen and livestock chores.  Not too bad really.  Frenchy and Peter got one half of the beef and we the other half.  Then later, when one of us runs out of beef we will split their jersey steer, being grown now,  between us.  Jessi and Luke just had a steer from Peter and Frenchy butchered for their freezer so we are all of us set for meat.  In another two or three weeks our meat birds will be ready to be processed for the freezer.  The other day we put up 7 young turkeys as well.  I like a good variety of meats so nobody gets bored with my meals!

I hope to post soon the fast food I prepared the other night for my kids to cook for the times when I am away and unable to cook.  We did up I think 6 pizzas, frozen raw and ready to be baked.  This was added to the other 6.  I’ll have photos for you of this very easy fast food soon!  Have a blessed day.

We live on a small family farm located in S.W. Minnesota, near the South Dakota border. The source of our honey is from white and red clover. The honey appears as liquid gold in color. Our honey is extracted using a hand cranked centrifugal force extractor. Then the honey is screened once into a holding container from which we later fill the small honey bottles. We do not heat treat the honey nor add any other ingredients. Pure and natural is our Minnesota honey! What could taste better?
View all posts by Callens Honey Farm →
This entry was posted in EVERY DAY FARM LIFE and tagged butchering jersey steer on the farm. Bookmark the permalink.